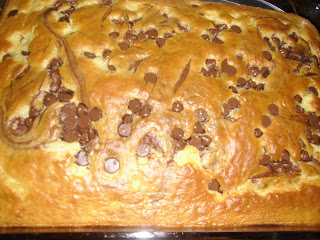 Okay I just made the best cake from a boxed yellow cake mix! It was super EASY and QUICK!  I mixed it according to directions, except I added a cup of sour cream to the mixture. It makes a cake much richer. Then I took out a cup of that yellow cake batter that was mixed already, and then mixed THAT cup  with a small box of dry chocolate pudding mix in a separate bowl. So I had my yellow cake mix bowl, and the 1 cup of wet cake mix mixed in with a dry package of chocolate pudding mix in a 2nd bowl. 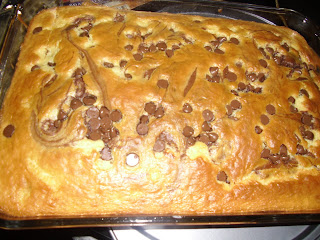 Then I greased a 9 x 13 pan and poured the yellow cake into it, then dropped blobs of the 2nd bowl with the chocolate pudding mix and 1 cup of batter in about 5 places in the yellow cake mix to marble the cake. I took a knife and knived through it to get a cool, marbled effect.  Then I dropped a cup or so of chocolate chips all over the top and baked it according to the cake directions.  Oh my! This cake did not even need icing, it was so delicious!  You could top it with a swirl of cool whip. Try it when you are pressed for time and need a delicious, rich dessert.  This was gobbled up in no time!

I just HAD to include some cute pics of my sassy granddaughters. Aren’t they just adorable?
They love grandma’s cakes too. mmmhmmm.