We had a ham last week. We’d done the ham sandwiches twice already so I used up the rest of the meat in a yummy Navy Bean Soup. I cheated and used canned white beans and canned butter beans. I wanted it done in 1 hour. 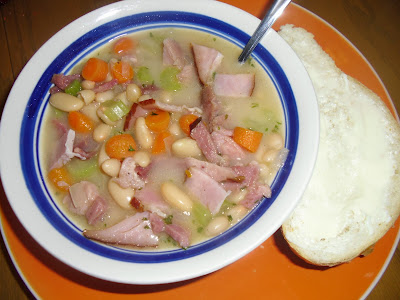 This ham and white bean soup is SO delicious and you can throw it together in 30 minutes. 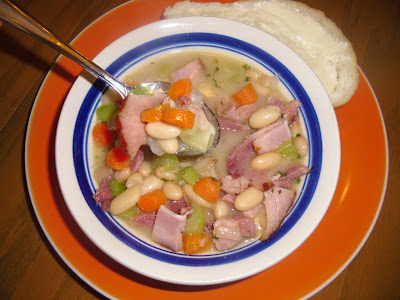 So I started by cutting off the leftover meat into small chunks and letting that boil in about 2 cups of water. I had leftover chicken broth and added that as part of the 2 cups. Then I chopped up onion, carrots and celery into the pot with the ham pieces. While they were boiling on low for about 20 minutes I got down the cans and opened them.

White Bean and Ham soup is easy and delicious. You can also make it with leftover rotisserie chicken! Here’s a picture of it with the chicken. Delish!

Finally I added 1/4 cup of sour cream to make the broth a little more rich. And threw in the beans. Then I let it all simmer another 5 to 7 minutes. I sprinkled seasoning salt and pepper over the soup to taste. It was delicious!

We got some fresh, crusty french bread from the market that was still warm! Yum. What a nice meal for the after shopping rush to come home to. It really hit the spot, I’m telling you! 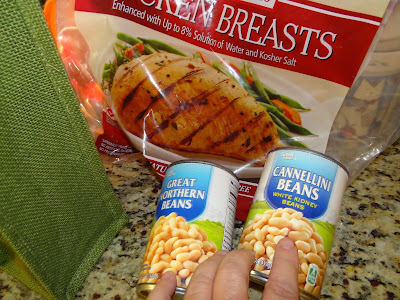 You can also make this soup with chicken breasts and everything else the same. It’s yummy too! 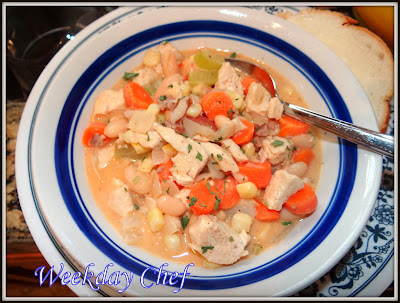 We just had this soup last night. It hit the spot with the snow falling outside and all of us eating around the T.V. with our individual blankies and quilts. We are spoiled rotton this holiday time to have so much. I am very grateful to not have to be a UPS man today too! Merry Christmas all!