She didn’t like us kids in the kitchen when she cooked. (Now of course I know why!) But I did learn how to make her meat loaf. It was delicious. I always loved meat loaf night.

Sometimes she would add leftover cooked rice to the meat loaf recipe and roll the mix into meatballs and then call them porcupines. I loved those too. You could do that too. I added brown sugar to this recipe to ramp up the flavor even more. It makes it just that much better.

I always try to add sweet Vidalia onions or a sweet white onion when I can find them in the market. They are usually at Costco too. But sometimes I don’t want a 20 pound bag of onions, you know?

I have also made this recipe into 2 mini loaves and put one in the freezer  (topped with ketchup mixture) for another meal since there are only 2 of us now.  That makes a nice treat when you come home from work tired and hungry. You have one to just pop in the oven!  Serendipity!

HERE is a link to the delicious salads at Rumbi, one of my favorite restaurants here in Utah.  They use lots of fresh Caribbean ingredients in their salads and fruity tasting vinaigrettes.

It has diced mango, Feta cheese, diced red peppers, red onion,  tortilla strips, chicken and salad greens with a mango-passion fruit dressing that will be kinda hard to recreate. But I will try.

White chicken breast meat cut into chunks (about a cup)
3 cups chopped Romaine Lettuce
1/3 cup red pepper diced into pieces
1/4 cup red onion, sliced very finely and then diced tiny
feta cheese crumble a tablespoon over each salad when serving
1 mango diced into half inch squares
toasted slivered almonds (I add a bit of white sugar while toasting)
tortilla strips over the top (or make your own by frying a corn tortilla in oil)

I pour everything into my blender except the oil and mix it up. Then slowly I add a few tablespoons of oil at a time to thicken up my sauce and emulsify it.  It is super easy and so delicious. You won’t want to buy bottled dressing ever again. But if you don’t want to try the dressing a good substitute is this one.

It’s called Litehouse Orange Citrus.  Another one I love is Kraft Light Raspberry Vinaigrette. Both are good with this salad.  I am also going to add some candied nuts.  I love those in salads and a lot of times I ask Rumbi to add them to mine for an extra charge.  I have slivered almonds on hand so I’ll put those in a frying pan and toast them with some regular sugar.  Enjoy! 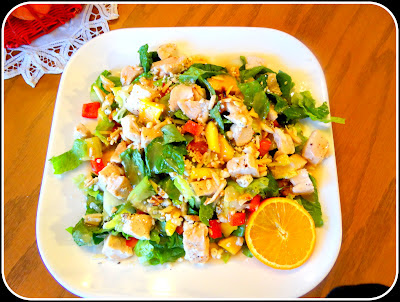 I must be on a Hawaiian kick. My last 2 blog posts were foods with rice and pineapple and the word “Hawaiian” in them. Do you think I’m subconsciously wishing for a Beachy,  Hawaiian vacation right about now, in the middle of a Utah winter? I think that’s highly possible!

Yeah.  Could be.  It was so cold the last few days. And I should know. I had recess duty during the day AND after school and it was snowing and super WINDY on Monday. My umbrella that I was holding kept doing the backward blow up thing and then would almost send me down the street like Mary Poppins. It was embarrassing! And I had the crosswalk detail so everybody picking up their kids after school SAW ME being blown around and my umbrella pulling tricks. Just call me Mary.  I felt like a big geek in a snowsuit!  So I long for the white beaches and sun and unfettered relaxation of a Hawaiian Island.

But since I can’t wrangle that for now, I can at least eat yummy food with the taste of Hawaii in it.  This recipe is easy, quick and really yummy.  And it’s a great choice if you have to feed an army or a crowd at a party. My sister-in-law served this at her son’s missionary farewell before he left for Texas. It was yummy!

So here are the easy ingredients for the basic chicken mixture that goes over rice.  Then the toppings are whatever you decide you want to add. I use one of those veggie and dip platters when I’m doing it for a crowd. You can find them at the dollar store for…..well…..A DOLLAR!  I use them when I’m doing cookie decorating in my classroom too. They are very versatile for putting out little piles of stuff.

DIRECTIONS
Boil the chicken and dice up.  Mix soup, salt and pepper, milk and sour cream and milk.

Cook rice until tender. I have a rice cooker so I added around 2 1/2 cups.  Put soup mixture on top of rice and top with any or all of the following:

It’s really filling, and everybody can pick their own preferences for toppings. That makes it even more of a fun meal. You can see my husband is having fun doing his own toppings…LOL.  Actually I made him pose…he’s just a good sport. :O

I use this handy dandy Progressive veggie chopper to do my peppers and carrots…..

Then while they are frying up for just about 5-7 minutes I make the sauce….

If you really like the taste of soy sauce, you could add a bit more. I don’t love it so I only put a small amount in mine.  I like a sweet sauce….so I add lots of pineapple juice, brown sugar and the ketchup gives it a little kick. It is not really thick, not too powerful either….I like it!

Pour the veggies out on a plate for serving.  If you have kids they will pick out the veggies they don’t want before adding them to their rice.  Then use the same fry pan and do the chicken. I baked mine, then sliced it like it is here…..then I added it to the empty veggie fry pan and added some sauce….and just stir fried it for a few moments to coat the chicken.

Then when the rice is ready it’s time to put it all together! Then pour a few spoonfuls over rice.  Yummy!  It’s healthy and colorful and the hubs LOVES it.  I made enough to put in Rubbermaid containers for our lunches the next day.

Sweet and Sour or Hawaiian Sauce:
3/4 Cup (basically the juice of 1 can) of  pineapple juice
1/4 Cup of  soy sauce
1/3 Cup of  rice vinegar
1/2 Cup of  brown sugar
2 T ketchup
1 1/2 T corn starch
Chicken Tenders – About 10 or 2-3 chicken breasts sliced up
(or you could use small meatballs too)
1/4 Sweet onion (Like a Vidalia) chop into 1/2 inch pieces
3/4 cup green or red pepper diced into 1/2 inch pieces
Sugar snap peas or Japanese pea pods
handful of thinly sliced carrots or diced carrots
1/2 Cup pineapple tidbits (or 3-4 rings, sliced into tidbits)

Stir fry all the veggies with a few tablespoons of oil.  Drain. Then  add 2 Tablespoons of the sauce over the veggies. You can stir fry the chicken in a separate fry pan with a little oil adding the sauce at the last 3 minutes.  Or if I am in a hurry I separately bake the chicken covering it in foil and adding the sauce the last 15 minutes of cooking). Then slice up the chicken and add to the vegetables.  Steam a few cups of rice in a rice cooker.  Then add rice to the plates, cover with the veggies/chicken mixture. Add a few tablespoons of sauce drizzled over the plate of veggies, chicken and rice.  Serve and Enjoy! 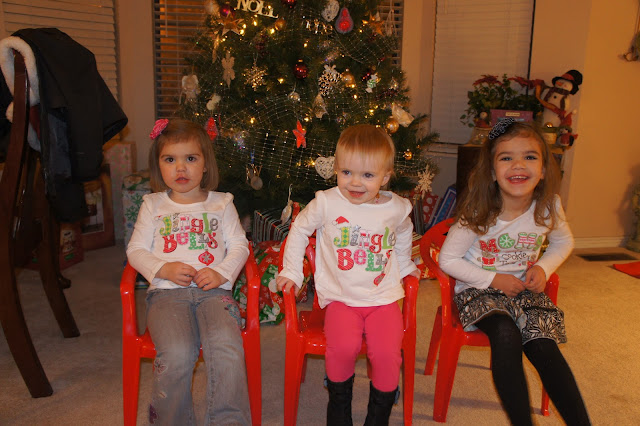 Looking back on the last 2 weeks……what were YOUR favorite things? 3 of mine are right here….
Grandma’s little cookie testers and tasters……Loved making cookies with them in December….. 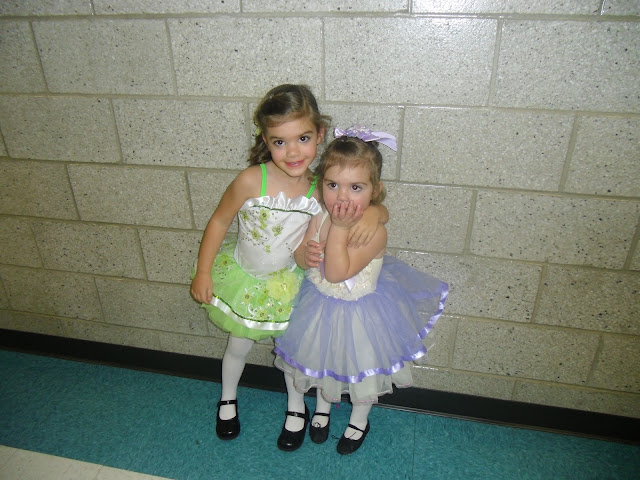 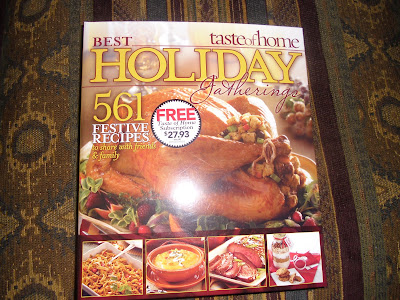 and have great conversation and laugh…….yeah…..it doesn’t get any better than this folks….Family!
These are a few of my favorite things….
Hope you get a year full of favorite things in 2012….

How many meals are you making this weekend? I get all mixed up unless I plan out my meals and ingredients at holiday time. It is kind of like a list of meals board…if I don’t I get overwhelmed with all the cooking and company. . Then I can go to the market with my list and hopefully not forget anything.
New Year’s Eve is one menu, New Years Day is another. It is hard to keep it all straight and not repeat anything you did on Christmas Eve or Christmas Brunch or Christmas night! No wonder us moms are all stressed out during the holidays! Geesh!

Salads have to be a little more special than normal, because, well……IT’S NEW YEARS!  Here is one that everybody loves no matter where I bring it.

2/3
cup pitted olives sliced in half

1/4
teaspoon coarsely ground pepper
A few shakes of Johnny’s seasoning to taste (find at Costco in a large bottle)
OPTIONAL – FOR A MEAL ADD 2 CUPS TORN WHITE ROTISSERIE CHICKEN MEAT.
OPTIONAL – 1/4 CUP DICED RED ONION FOR ONION LOVERS
I usually buy my artichoke hearts from Costco because they are good quality and cheaper in the large jar.  I only use about half of this jar in one salad though. And you do have to cut them up into small chunks. The feta cheese is cheaper NOT in the quickie deli section. Look in the cream cheese section instead for a better price.
Boil the pasta ( I look for colorful pasta for holidays…sometimes in fun shapes too) but any kind will do, curly, shell, or ziti style or bowtie are all good. Then drain it. Add the sliced artichokes, chopped tomatoes, diced peppers and cucumber, celery, and olives. I cut my olives in half. Add a few cups of diced rotisserie chicken for a meal.
Crumble the feta cheese over everything and then add the Greek dressing (it looks like an olive oil thick Italian with bits of cheese in it, kind of cloudy looking). A good brand of Greek dressing is hard to find.  Look for Girrards Greek and Feta Cheese or Trader Joe’s Greek Dressing or make your own. A good recipe is HERE at All recipes.com. Taste and shake a little seasoning salt over it.  Let it marinate in the fridge for a few hours before serving.
It is delicious and you will get many compliments on it. It is just a little different from stuff everybody else brings to the New Year’s Party. It is the bomb for a juicy good side dish!